In my Garden Journal: start of the herb spiral

A herb spiral in my garden was what I wanted. I knew about the principles of permaculture, for years. It was about time to put them into practice. The spot once was a small terrace. Some years before I took the hexagon-shaped bricks out, piled them along the edge. In new soil I tried to grow pumpkins there. I should be aware this spot had a problem: slugs! They ate every young pumpkin plant in there!

I thought to know better: the slugs ate the pumpkins, but they wouldn't like herbs. They never ate the rosemary, sage and chives. Now I know those are plants they do not like. But that isn't the same for all herbs ... or the vegetables I was planning to grow there too. 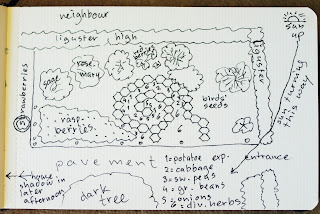 Map / design of the herb spiral

So I had a spiral in mind. The hexagon bricks were right for shaping it. In the middle it had to be a little higher. First the soil had to be prepared. Late 2014 I started. A cardboard box, filled with cotton rags, soil over it, made the middle part higher. I covered the ground with cardboard. Bricks prevented it from being blown away by the wind. And so it rested for some months.

We would leave for six weeks, from mid February. Early February I went on with the preparations. The cardboard, already soaked wet, was torn to pieces. I put over a layer of soil and autumn leaves. Leaves of planes and willows were easy to find in the neighbourhood. I shaped the spiral neatly, rising to the middle from one to three layers of stones. Now it had to wait until we'ld return from the trip.

It was the start of April. Time to sow seeds. I sowed some different herbs, marigolds, beans and peas. At the market I saw cabbage and lettuce plants for sale. I bought some cabbage and planted it at different spots in the garden. I did not buy lettuce, thinking it would be 'slug fodder'. I found out all too quick also cabbage is fodder for the slugs! OK, no cabbage in the spiral then. Let's see how the seeds grow. Yes, I saw something green coming ... Happy I portrayed the little seedlings in my Garden Journal. Some days later they were nowhere to find. Only slug traces ... 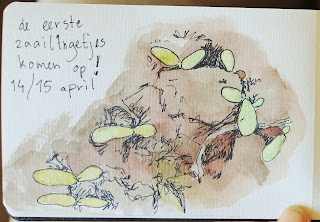 The first seedlings in my Garden Journal

I had to do some research on permaculture ways for fighting slugs. I asked at some forums and Facebook: which are plants slugs hate? I thought to put such plants alongside and inbetween the herbs, and then the sluggs would stay away. Good thinking, but alas ... such plants do not exist! There are plants slugs do not like to eat: onions and alike, rosemary and wormwood. But to use them to get the slugs out, you have to plant three rows of them closely together around your spiral. So someone from England told me. 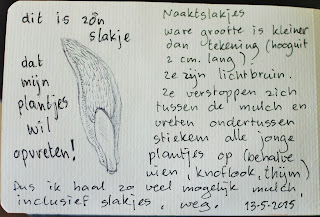 Drawing and description of  the slug

I got more advices on slugs. Most people told about coffeeground. I put a layer of that stuff around some cabbage plants in other parts of the garden. Now I have one cabbage left (because of the coffee, or was it a better part of the garden?). A little bit of coffeeground is not sufficient, it has to be a thick layer in a circle around a plant. Crumbled egg shells, suggested by some, did not work. I even saw slugs nibbling at the egg shells. 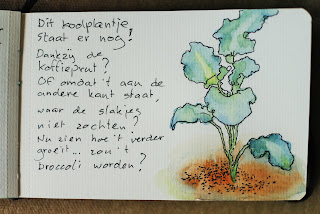 The last cabbage plant in my Garden Journal

Another advice I got: nematodes. Nematodes are like very small worms living in slugs. If a slug has too many of it, it dies. It's easy to grow nematodes. First you catch slugs daily, as much as possible. You put them in a bucket with a lid, with a little water and plants they eat. Then one day you see all slugs are dead. Then you fill up with water, stir and sieve it in a watering-can. Pour it all over your garden. This water contains so many nematodes, they will soon kill all slugs. It seemed to work. At least the amount of slugs was diminished very much after this process. Or was it because of catching the slugs daily?

June started, more sun, dryer. Not often I discovered a slug. I had some nicely grown plants in containers. I thought time to plant them was now ... You guess it: next morning they were damaged again! Even if there is only one slug, it can damage all plants in one night. The slug picks out the tasty green point in the middle. That's the point from where the plants grows. Without that, it's lost! 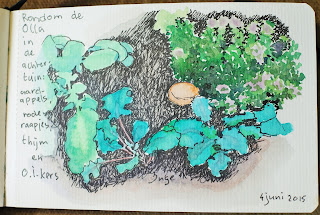 Some plants around an 'olla' in my Garden Journal

Now the conclusion. First: start doing research long before you start your herb spiral. Study the history of the spot, the soil, the plants and shrubs growing there (now and before). Read (or re-read) all there is to know about permaculture before you even start your preparations. Second: wait until everything is in balance before planting any vulnerable vegetables. In the first year there is definitely no balance, probably that will take a few years.

How could I do better? I should have prepared the spiral and planted it all with slug-resistant herbs. Think rosemary, sage, mint, wormwood, garlic, chives. After some years, when it's clearly in balance, I can start experimenting other species. So: no more vegetable plants this year! Now onions, potatoes, mint (that's like weed) and still one pea-plant are growing there. The empty places I can fill with rosemary and sage. And I'll have patience! 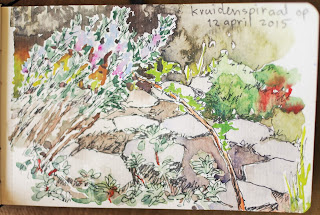